Issa Touma is a photographer and curator from Aleppo (Syria). His photographic work can be found in major museum collections, and his recent film “9 Days – From My Window in Aleppo” has received international accolades, including the European Short Film Award 2016. 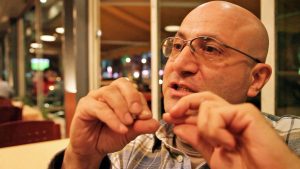 Finding himself isolated from the international art community in his own country, Touma established the Black and White Gallery in 1992, the first photography gallery in the Middle East. After its closure in 1996, Touma founded Le Pont, an independent art organisation and gallery that promotes freedom of expression and stimulates the local art scene through international events. In 1997, he started the International Photography Festival Aleppo, which despite the horrors and uncertainties of the conflict, continues to take place every year. In 2012, shortly after the war broke out, he initiated Art Camping. This event in the form of workshops counters violence with artistic interventions. Its aim is to bring young people from various religious and ethnic backgrounds together, encouraging them to express themselves through culture.

Issa’s short film 9 Days – From My Window in Aleppo (2015) has recently won the prestigious London Film Festival’s Short Film Prize (2016) as well as the European Film Prize (2016). He is currently releasing his second film.

Issa Touma’s residency was curated by Perpetuum Mobile and co-organised in collaboration with PM  and HIAP – Helsinki International Artist Programme in Helsinki in October-December 2014. It was  as a part of the Nordic Fresh Air programme funded by the Nordic Culture Point and the Finnish Ministry of Education and Culture.

Currently, Issa Touma is the first guest artist in Gävle, Sweden, a new city of refuge for visual artists in the ICORN network, facilitated by Perpetuum Mobile in March 2016.

Veronika “Nika” Nikulshina is a multidisciplinary artist and human rights defender from Russia. She is known for her work as a performance artist and as a prominent member of Pussy Riot. Her work with the punk feminist group has made … Continue reading →

Anna (Anya) Kuzminykh is a screenwriter and film director from Russia, known for her work as a human rights defender and member of Pussy Riot. A graduate of the renowned Gerasimov Institute of Cinematography (VGIK) with several awards to her … Continue reading →