Ivor A Stodolsky, co-founder and co-director Artists at Risk (AR) 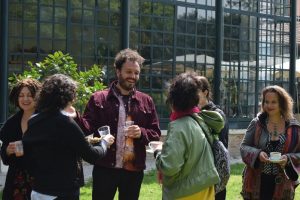 Ivor Stodolsky is co-founder, co-director and curator of Perpetuum Mobile (PM), Artists at Risk (AR) and Ecologists at Risk (ER) with Marita Muukkonen. He is an internationally active curator, writer and theorist. He received joint honours in Philosophy and Mathematics at Bristol University and completed his MRes at the London Consortium (Birkbeck, Tate, BFI, ICA). His doctoral research at Helsinki University was centred on the Russian cultural underground of the 80s and 90s. During his time in academia, he was a CIMo and Ehrenrooth Fellow and worked for several years at the Alexander Institute. Prior to this, he worked in global media as Associate Editor of Project Syndicate, “The World’s Opinion Page”. Earlier he co-founded alternative art projects and spaces in London, Vienna and St. Petersburg. Today, aside from curating and institution-building, Ivor is an editor and contributor to journals and publications and a speaker on art, politics and philosophy.

Currently, Ivor Stodolsky’s curatorial practice centres on Artists at Risk (AR), a Perpetuum Mobilezation (PM). PM develops larger-scale thematic projects and platforms that encompass exhibitions, conferences, workshops, residencies, publications and films relating to art, politics and philosophy. Recently, he curated the symposium “Institutions and Resistance – Alliances for Art at Risk” with Marita Muukkonen, Peter Weibel
Teresa Retzer and Philipp Ziegler at the Center for Art and Media | ZKM Karlsruhe. Academic articles include A Multi-Lectic Anatomy of Stiob and Poshlost’, and art-related publications include The Raw, The Cooked and The Packaged – The Archive of Perestroika Art, Paths Not Taken, The Square, and recent articles such as 21st Century Re-Alignments in Art and Politics.