We are happy to extend a warm welcome Nkosilathi Emmanuel Moyo, a Zimbabwean writer, poet, protest musician, and human rights defender, who will be artist in residence, co-hosted by PM-Perpetuum Mobile and HIAP at Eläintarha Villa, as a guest of AR-Safe Haven Helsinki from February to May 2019. 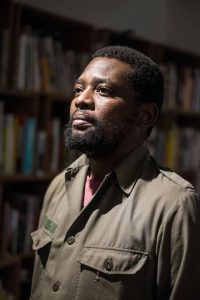 Nkosilathi Emmanuel Moyo (31) is a human rights defender, writer, poet, and protest musician based in the small mining town of Kwekwe in the Republic of Zimbabwe. He is  co-founder and Director of the Zimbabwe Organization for Youth In Politics (Z.O.Y.P), a grassroots non-profit youth organization advocating for youth participation and representation in political processes and policy formulation. He is also the Senior Trainer at the Community Human Rights Defenders Academy, a human rights institution which educates human rights defenders from grassroots and remote communities in Zimbabwe. He rose to prominence for using arts (poetry, protest music, and non-fiction books) to challenge government oppression and political corruption in Zimbabwe. He wrote three political books titled Robert Mugabe From Freedom Fighter To The People’s Enemy, Zimbabwe A Revolution Waiting To Happen, and Dismantling Mugabeism. He has also composed a protest musical album Pisarema raNkosilathi (Psalms of Nkosilathi), which is comprised of 14 protest songs which call upon the government of Zimbabwe to respect human rights, democracy and the rule of law.

Moyo’s life has been threatened several times by suspected state agents in Zimbabwe, and he has been subjected to death threats, torture, arbitrary arrests, raids and continuous state surveillance. Following the recent military crackdown on civilians in Zimbabwe after nationwide protests which started in Zimbabwe on 14 January 2019 he was targeted by state agents forcing him to go into hiding. More than 700 people were arrested, 12 were killed, and prominent activists or opposition leaders are either in prison or in hiding. Moyo’s protest songs and poems were circulating on social media prior to the protests which made him a target of state security. Moyo was then awarded a three months fellowship by Perpetuum Mobile and will be a Guest of Safe Haven Helsinki from February to May 2019.

During his fellowship in Helsinki Moyo will organize poetry nights where he will showcase his poetic work and will also broaden his artistic networks by engaging various artists and writers in Finland exchanging and sharing notes.

Nkosilathi Moyo was previously resident in Berlin as the first AR-Safe Haven Berlin Resident from 9th of January to 8th of April 2018. This programme was curated and produced by Perpetuum Mobile / Artists at Risk (AR) programme and hosted in cooperation with  SAVVY Contemporary.

Nkosilathi Moyo is an Artists at Risk (AR) Resident, hosted in cooperation with HIAP–Helsinki International Artists Programme at Eläintarha Villa, AR-Safe Haven Helsinki. The AR-Network is curated by Perpetuum Mobile (PM) and is coordinated by the AR-Secretariat, co-funded by Kone Foundation. This residency is funded by the Division of Culture and Leisure of the City of Helsinki.

MOSCOW. Today Maria (Masha) Alyokhina, a key figure in the world-renowned feminist protest art collective Pussy Riot and a member of Artists at Risk (AR)’s International Advisory Board was sentenced to one year of “restricted freedom” by the Moscow district … Continue reading →

AR-Alumni Angela Aldebs is one of the lead characters in the third season of the award-winning Finnish drama, Sekasin. In the show, Aldebs plays the role of Masumah, an Afghan refugee and one of the four young asylum seekers fleeing … Continue reading →

The fantasy-folk band IRDORATH were among the 16 people brutally detained by unmarked soldiers with machine guns at a cottage near Minsk on August 2nd during a birthday party for the band’s frontwoman, Nadezha Kalach. The Belarusian Council for Culture … Continue reading →