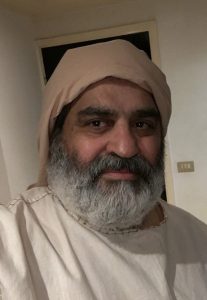 Mohamed Jawad Husein Hameed is a Bahraini musician, singer and human rights and environmental activist. As a resident of Ma’ameer, a village in the Kingdom of Bahrain that is surrounded by over 130 polluting factories, industrial workshops, petroleum and petrochemical plants, Jawad, as he likes to be known, became aware of environmental damage at an early age. Throughout his career, he has been engaged in drawing attention to environmental and human rights abuses in his country and region.

Unfortunately, this has also led to unwelcome attention and indeed persecution at the hands of the Bahraini authorities. He has been subject to unlawful arrest, travel bans and increasing infringement of his ability to make a living. His treatment has been condemned by international human rights organisations. This persecution has not deterred Jawad, who is resolute in his demands for clean air and a healthy environment, and an end to discrimination in Bahrain.

As part of his artistic practice, Jawad has breathed life into the ‘Delmonian Lyre’, which he maintains is the oldest musical string instrument known to humankind. Following 4,000 years of absence from musical performance, Jawad has had the lyre rebuilt and performed with it at venues around the Middle East. The Delmonian Lyre was launched at an event that was broadcast on national television in Beirut, Lebanon. His work has featured on international channels as well.

For Jawad, the instrument’s appeal comes in part due to its diversity, allowing a wide range of keys and scales to be played. Aside from its remarkable ancient heritage, he also feels it is notable for its accessibility to musicians from eastern and western traditions, making it a universal instrument.

Mohamed Jawad Husein Hameed is an Artists and Ecologists at Risk (AR-ER) Resident, hosted in cooperation with HIAP and in association with the Finnish Music Council and the Finnish Musicians’ Union on the island of Suomenlinna, at AR-Safe Haven Helsinki.  The AR-Network is curated by Perpetuum Mobile (PM) and is coordinated by the AR-Secretariat, co-funded by Kone Foundation. This residency is funded by the Division of Culture and Leisure of the City of Helsinki.