We warmly welcome Mohamed Jawad Husein Hameed, a Bahraini musician and singer, as our first Artist and Ecologist at Risk Resident at AR-Safe Haven Helsinki on the island of Suomenlinna in Helsinki. Jawad is an activist, focussed on environmental and human rights abuses in his village Ma’ameer in  Bahrain and the wider region. During his AR-Residency Jawad will continue his unique work with ‘The Dilmonian Lyre’, a 4000 year-old instrument he has reconstructed and performed on. Jawad intends to conduct musical events and ceremonies drawing attention to humanitarian and ecological crises in his region and around the world. 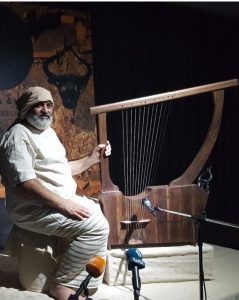 Mohamed Jawad Husein Hameed is an Artist and Ecologist at Risk Resident curated by Perpetuum Mobile (PM) and hosted at AR-Safe Haven Helsinki by PM at HIAP on the island of Suomenlinna, Helsinki. The programme in Helsinki is being coordinated in partnership with the Finnish Music Council and the Finnish Musicians’ Union..

Artists at Risk’s AR–Safe Haven Helsinki is curated by Perpetuum Mobile (PM) and co-hosted by PM and HIAP–Helsinki International Artists Programme on the island of Suomenlinna. It is funded by the Division of Culture and Leisure of the City of Helsinki.