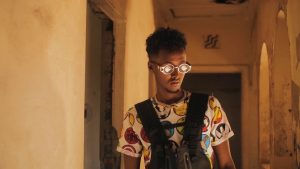 Lil Baliil in the music video for the song Koko, a collaboration with King CK

Salad Ali, aka Lil Baliil, is a Somali musician, songwriter and performer from Nairobi, Kenya. He is a leading artist in East Africa and a key figure in Somali Afro Pop.

Lil Baliil strives to empower and inspire Somali youth through his music by “bringing Somali music to the world”. His songs Molo Molo, Cub Cir, Wakere and Masha Allah each have over a million views on YouTube. Magix Enga, Produza Paulo, Petra Music, KaashKeed, SoFresh and King CK are just some of the internationally renowned artists and producers he has collaborated with.

After his music went viral Lil Baliil became a target of various militant groups in East Africa and he was forced to go into hiding.

Lil Baliil is an Artists-at-Risk (AR) Resident, hosted in cooperation with ufaFabrik at AR-Safe Haven Berlin. The AR-Network is curated by Perpetuum Mobile (PM) and is coordinated by the AR-Secretariat, co-funded by Kone Foundation. This residency is generously funded by a German funding body.