Nicole Willis, BFA, is a singer, songwriter and visual artist from New York City, living and working in Helsinki. She is best known for her twelve-year partnership with the music group, The Soul Investigators. She has also worked with a number of established artists, such as Curtis Mayfield, Jimi Tenor (Cola and Jimmu), Maurice Fulton, Tony Allen, Shawn Lee, Bosq, Konishi Yasuharu, Ian Svenonius and Leftfield. Alongside her various projects, Willis has toured Central Europe, Japan and Australasia.

As the owner of the record labels Herakles Records and Persephone Records, she produced and released the album My Name Is Nicole Willis in 2017, whose single Still Got A Way To Fall recently surpassed the milestone of two million streams on Spotify. The single Swords,

released with Leftfield (from the 1999 album Rhythm and Stealth) achieved certified platinum sales in the UK.

Her 2005 album Keep Reachin’ Up, released under the name Nicole Willis and the Soul Investigators, achieved gold sales in Finland. The United States’ 44th President Barack Obama also included the title track of the album on his official Re-election Spotify Playlist, while another track from the album, No One’s Gonna Love You was featured on the soundtrack of Showtime television series Ray Donovan, garnering broad attention.

Willis completed her Bachelor’s studies from the Institute of Fine Arts at the Lahti University of Applied Sciences in 2009. She was a contributor to Sophie Calle’s installation piece, Take Care of Yourself, a photo study of performance for exhibition and publication. Currently, after her solo exhibition Gatherings and a sabbatical, Willis is developing a documentary series studying 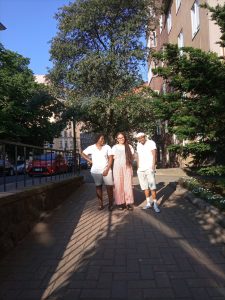 individuality, commonality and the experiences of faith under the working title Atoning For Gen Alpha.

In her capacity as an Artists at Risk (AR)-Peer Artist, Willis is currently supporting AR-Safe Haven Helsinki Residents Grammo Suspect – Rainbow Ambassador Kenya and Timeka Suspect, and helping AR introduce them to the local arts and music scene.

Nicole Willis is a substitute member of the board of Perpetuum Mobile ry, the association which runs Artists at Risk (AR).