Artists at Risk (AR) is very pleased to welcome Andrei Kureichik as the 2021 AR-ICORN Resident at AR-Safe Haven Helsinki. Andrei Kureichik is an internationally performed playwright, screenwriter and director as well as a political activist of significance in Belarus.

Kureichik is a founding member of the Coordination Council of Belarus (CCB) alongside notable figures such as Belarusian President-Elect Svetlana Tikhanouskaya and Nobel Prize laureate Svetlana Alexievich. The CCB was established to ensure the democratic transfer of power in the wake of the contested 2020 presidential elections in Belarus, which autocratic president Alexander Lukashenko refused to concede. Forced into exile during the brutal crackdown that ensued, Kureichik relocated to Ukraine, then Tanzania, Slovakia, and now, with the support of AR, to Finland. 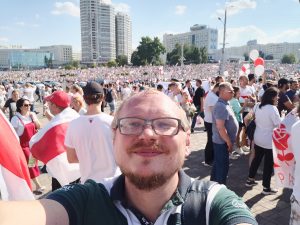 Kureichik has written and/or directed 27 feature films, as well as over 20 plays that have been staged in 37 countries worldwide. Recent notable works of his include the 2017 feature film Moving Up (as screenwriter), which became the highest-grossing film in Russian cinema history, and 2020’s Insulted.Belarus (Обиженные.Беларусь(сия)).

In a recent interview with Performing Arts Central Europe (linked below), Kureichik speaks of an impossibly difficult decision: leave his home, family, production company and planned artistic projects or face certain imprisonment and torture. As pro-democracy colleagues around him were being rounded up, Kureichik fled. But he refuses to let exile silence him: “I said to myself that even though I had to run I would not be a quiet fugitive, but that I would resist from a distance.” 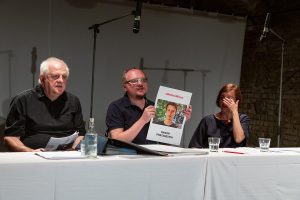 Insulted.Belarus was an immediate result of this commitment to continue to fight for Belarusian democracy. Written in the months following his escape from Belarus, this theatrical documentary-drama “portrays the real dramatic events in Belarus in August 2020, events [Kureichik] personally experienced.” Since first being staged in Odessa, Ukraine, it has grown into a unique project of international solidarity with Belarus, featuring at the centre of over 200 performances, readings, screenings and discussions worldwide. 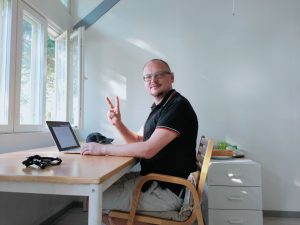 Kureichik brings his commitment to fight for Belarus with him to Finland, where he will have all the support necessary to work on new artistic projects and be introduced to leading figures in the world of film and theatre to that effect. Preliminary plans also include lectures in the Department of Film, Television and Scenography at Aalto University.

Andrei Kureichik is an AR-ICORN Resident at Artists at Risk (AR)-Safe Haven Helsinki. The programme is co-funded by the City of Helsinki Culture and Leisure Division and the Creative Europe Programme of European Union, curated by Perpetuum Mobile (PM) as part of Artists at Risk – A European Network of Safe Havens (AR-ENSH). The AR-Network is coordinated by the AR-Secretariat with support from the Swedish Arts Council and Kone Foundation and curated by Perpetuum Mobile (PM).