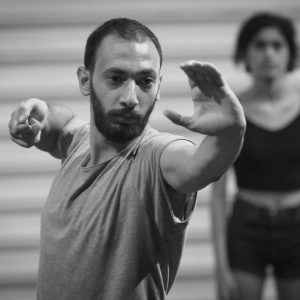 Aws Al-Zubaïdy (1993) is a Palestinian actor and director currently based in Tunis, Tunisia.

A graduate in theatre from the Drama Academy Ramallah in Palestine and Folkwang University for the Arts in Essen, Germany, Al-Zubaïdy also learned acting art at the National Theatre of Tunisia in Tunis.

Al-Zubaïdy has appeared as both an actor and director at various theatres across Palestine, Germany, Jordan, Tunisia and Pakistan. He has acted at the National Theatre of Tunisia, where he was the leading actor in the play Martyr, under the direction of noted playwright and director Fadhel Jaibi. In Martyr, Al-Zubaïdy touched upon a range of topics and social issues ranging from religion to sex and homosexuality, taboos he would not have been able to explore on stage in his native Palestine. 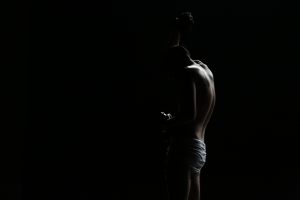 However, as with many professionals in the performing arts, Al-Zubaïdy was hit hard by the Covid-19 pandemic. Despite working tirelessly on the play for a year, the programme was stopped in its tracks. Lack of acting work renders his situation in Tunisia precarious, but a return to Palestine is far from desirable, given both the restrictions on his artistic freedom and the oppressive conditions of Israel’s illegal occupation of the West Bank.

As an AR-Resident in Tunisia, support from the AR-Bridging Fund will afford Al-Zubaïdy a measure of stability to continue developing his artistic practice in anticipation of the reopening of cultural institutions and a return to the stage.