The fantasy-folk band IRDORATH were among the 16 people brutally detained by unmarked soldiers with machine guns at a cottage near Minsk on August 2nd during a birthday party for the band’s frontwoman, Nadezha Kalach.

The Belarusian Council for Culture has launched an appeal for funds to provide financial support to the imprisoned members of IRDORATH and their families following their arrest. 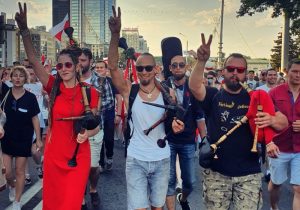 The members of the band are in prison awaiting their court date, having been charged with “organization of actions that grossly violate public order” for which they may face up to four years in prison. These charges stem from the band’s live performances during the peaceful demonstrations that swept hundreds of thousands of people into the street following last August’s fraudulent election.

Artists at Risk (AR) condemns this violent attack on the freedom of expression as well as the continued blatant disregard for democracy and the criminalization of artistic expression by Lukashenko’s regime.

The Belarusian Council of Culture in exile, which aims to support repressed artists, also has other resources that can be used to show solidarity with the artists and the people of Belarus: https://byculture.org/en#support.