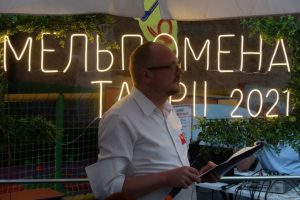 The premiere of Andrei Kureichik’s new documentary play Voices of New Belarus took place in the context  of the 23rd International Theater Festival “Melpomene of Tavria” in the city of Kherson, Ukraine.

The play is made up of letters, interviews and court documents from those who fell victim to the repressive machines in Belarus during the period from May 2020 to September 2021. Monologues by Maria Kolesnikova, Stepan Latypov, Nikolai Statkevich, Marina Zolotova, Vitold Ashurk and many other victims of the regime were delivered by Mikola Kulesh Theater and the play was staged by the chief director of the theater, Sergei Pavlyuk. The premiere was attended by Georgian director and actor Kakha Gogidze, who read the monologue of the Belarusian bard and poet Anatoly Kudlasevich. The letter of the blogger Igor Losik, who went on a 42-day hunger strike in a Belarusian pre-trial detention center, was voiced by the playwright’s very own son, 14-year-old Gleb Kureichik. The premiere was broadcasted on Kureichik’s Alternative Blogvision channel, where it was viewed live by over four thousand viewers from Belarus. 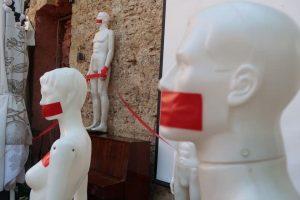 “This is my first play in which I completely rejected both the traditional author’s text and any attempts to stylize or interpret the facts underlying the text. Sometimes the truth requires nothing more than to be told verbatim. Sometimes, no one can deliver the words better and more accurately than the prototypes themselves, those who have gone through something that no fantasy can capture. My author’s work in this text consisted only of looking at and reading many hundreds of testimonies of those who fell victim to the political terror in Belarus, and then to choose from those 15 voices – the mosaic of which would form for me into a single comprehensive  image of what happened. This text is the collective confession of a beaten, raped, humiliated and dead country,” remarked Kureichik at the premiere of Voices of New Belarus. 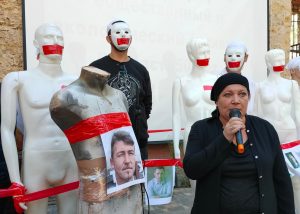 This is not the first time that the Melpomene of Tavria, Ukraine’s largest theater festival, has displayed projects of solidarity with Belarusians. It was here that Kureichik’s Insulted. Belarus(sia) premiered for the first time in September, 2020. Since then, the theatrical project has become one of the greatest theatrical acts of Belarusian solidarity in the world with over 200 readings in 29 languages. The project has been performed in theaters from Hong Kong to the Swedish Royal Theater, from  the national theaters of Romania, Bulgaria, Moldova, to the Maly Theater of Rimas Tuminas, from Belgium and the Netherlands to Nigeria. Over 40 readings were organized by theaters in the United States in Boston, New York, Los Angeles, Philadelphia and New Orleans. All readings were accompanied by discussions about the situation in Belarus. 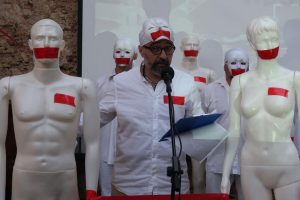 This premiere of Voices of New Belarus marks a new journey. This theatrical piece documents the historical significance of the events in Belarus. “Ahead of the premieres in Poland, Slovakia, Finland, and the USA, as a playwright, I will continue to tell the truth of our country in the language of theater”, Kureichik remarks.

Andrei Kureichik, the screenwriter behind the box-office hits  “Moving Up”, “Love-Carrot”, “Yolki”, many of whose plays have also been performed at  the National Theater of Belarus, was himself forced to flee the country.

You can watch the reading on Andrei Kureichik’s Alternative Blogvision channel.