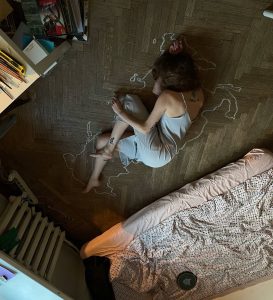 Veronika « Nika » Nikulshina is a multidisciplinary artist and human rights defender from Russia. She is known for her work as a performance artist and as a prominent member of Pussy Riot. Her work with the punk feminist group has made Nikulshina a target of political persecution in Russia, forcing her to leave the country. Along with her partner Roma Durov and fellow Pussy Riot members Anya Kuzminykh and Sasha Sofeev, she recently escaped to Georgia, where she is currently hosted by Artists at Risk (AR)-Tbilisi at Untitled Gallery.

Nikulshina’s artistic practice is centered on issues of social, political and human rights. Through performance art, and more recently, film, she explores themes such as the relationship between the individual and the oppressive state system in Russia, as well as the social and psychological issues that emerge as a result of Russia’s authoritarian political regime.

Nikulshina was one of the four Pussy Riot members to storm the pitch at the 2018 FIFA World Cup Final in Moscow, an event Vladimir Putin attended in person. It has been estimated that it has been viewed by over one billion people worldwide. This protest-performance piece, entitled Policeman enters the game challenged the Russian regime’s (in)justice system, including the practices of prosecuting dissidents on trumped-up charges, arresting protesters at political rallies, and keeping political prisoners under conditions amounting to torture. It also marked the eleventh anniversary of the death of the major Russian conceptual poet and dissident, Dimitry Prigov. 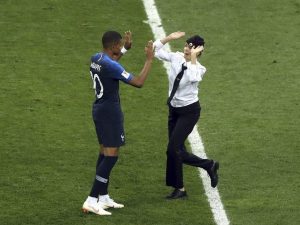 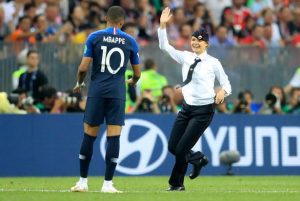 In 2020, Nikulshina was involved in two further high-profile Pussy Riot actions. In the first, she and a group of fellow artists-activists – including Kuzminykh and Sofeev – staged an action on Red Square to protest the constitutional amendment allowing Putin to extend his term in office until 2036. In a nod to the famous 1991 protest by the conceptual art group E.T.I, the artists-activists lay down on the Square, their bodies forming the numbers 2036. 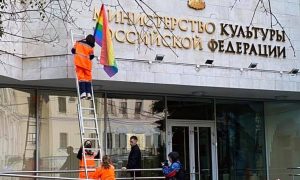 Later in 2020 on Putin’s birthday, Nikulshina, Sofeev and three other members of Pussy Riot staged a performance-action across Moscow, hanging Pride flags on major government and administrative buildings in protest at his government’s oppressive policies on LGBTQ rights. As part of this performance they released a manifesto including demands for investigations into the murder and dissapearance of LGBTQ people; an end to the harassment of LGBTQ activists and organisations; and laws preventing discrimination on the basis of gender and sexual orientation, including the legalisation of same-sex partnerships.

In May of 2021, Nikulshina started filming an art-documentary film, but police stormed the shooting, arresting and detaining her. Upon her release she was almost immediately and violently re-arrested, alongside her partner and fellow AR-Resident Roma Durov. This clear campaign of political persecution and intimidation led them to decide to escape to Tbilisi, Georgia where they are hosted by Untitled Gallery at AR-Tbilisi.