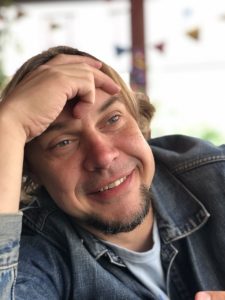 Maksim Shved is a filmmaker, photographer and journalist from Belarus. Born in the capital, Minsk in 1979, Maksim graduated from the Belorussian State University’s department of Law and Politics in 2002. He started film studies in 2013 at St Petersburg High School of Directors and Screenwriters and later enrolled in the Wajda Film School in Warsaw, Poland. He graduated in 2016.

His debut documentary “Pure Art” premiered at the 2019 Krakow film festival in Poland. Pure Art went on to win the Best Director Award at Artdocfest in 2019 and Best Film at the 2021 Beast film festival.

Maksim documented the 2020 Belarussian presidential election in his role as a journalist for Current Time TV. While working to cover the protests against the Belarusian government and President Alexander Lukashenko, he was accused of “participating in mass unauthorised events”. 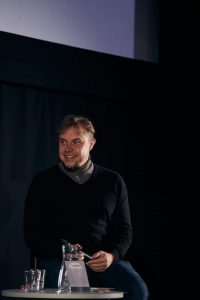 Maksim Shved at the “Belarusian Evening”

As a result, he was arrested on 10 August 2020. During his arrest, he was beaten and tortured by police special forces. He was later charged and subsequently released after serving a five day sentence.

After his release, Maksim’s filmmaking continued to highlight the political protests and escalating tensions in Belarus . He also chronicled the story of his arrest and imprisonment in the film What will we do tomorrow?

Due to his standing as a filmmaker, journalist and ex-prisoner, Maksim was at great risk for persecution by the Belarusian authorities and decided to seek asylum in Bulgaria. He is currently an Artist at Risk (AR)-Resident at AR-Radar Sofia.  On the 17th of January, 2022, Maksim and AR-Radar Sofia staged a “Belarusian evening” acquainting the audience with Maksim, his story and narration, and also treating them to an unexpected screening of his film.

Maksim Shved is an Artists at Risk (AR)-Resident at AR-Radar Sofia. The programme is co-funded by Nordic Culture Point and co-organised by Perpetuum Mobile (PM) as part of the AR-Network. 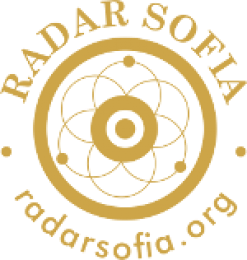