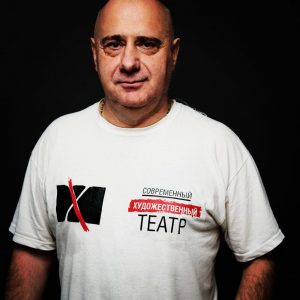 Uladzimir Ushakou (Vladimir Ushakov) is a Belarussian art director and founder of the Modern Art Theater in Minsk. Born in 1963 in Tomsk, Russia, his family moved frequently due to his father’s obligations as part of the military. As a result, he studied in Kazakhstan, Russia and Belarus. In 1985 he graduated from the Tashkent State Institute of Culture and began his creative career at the Tashkent Film Actor Theater.

In 1990, Uladzimir moved to Belarus, where he acted and directed several plays. From 1995-2000, he worked at Gomel Drama Theater where he directed and staged plays such as Mirror, Pannochka, Scenes at the Fountain, Turandot, and Private Ivan Chonkin. He also worked with the Gomel Independent Theater and the Moscow School of Modern Drama Theater. 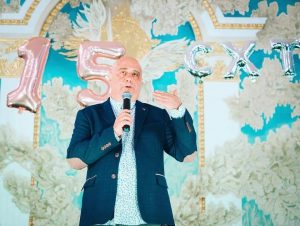 On September 25, 2004, Uladzimir founded the Belarusian Modern Art Theater, a private theater in Minsk, where he served as director for 17 years. During this time, the theater put on more than 35 productions, including plays such as Sublimation of love, Not the fifth, but the ninth and Madame Rubinstein among others, enjoyed by audiences from Belarus to Cyprus, Ukraine, Russia, Lithuania and Germany. As an actor, Uladzimir has also starred in 12 films and TV series, and also more than 20 theatrical roles.

In 2016, the Belarusian Modern Art Theater began staging performances centered on social and political themes in modern Belarus. In 2018, these performances were designated as undesirable by the Belarussian authorities, who moved to stop performances and close the theater. On January 5, 2021, the theater was finally shut down by the authorities. Uladzimir Ushakov was forced to leave the country in April 2021.

Ushakov fled to Kiev in Ukraine where he has continued his work in the theater. In January 2022, Uladzimir became an Artists at Risk (AR)-Resident at AR-Safe Haven Helsinki.

Uladzimir Ushakou is an AR-Resident at the Artists at Risk (AR)-Safe Haven Helsinki. The programme is funded and organised by PM as part of the AR-Network. The AR-Network is coordinated by the AR-Secretariat and curated by Perpetuum Mobile (PM).