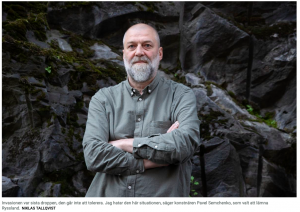 Pavel Olegovich Semchenko (1967) is a Russian performance and visual artist, set designer, and theatre director who is currently an AR-Resident in Helsinki. Semchenko escaped to Finland with actress, AR-Resident and his wife, Anisiia Kronidova, following the Russian government’s crackdown on dissidents who opposed the war waged on Ukraine.

In 1988, Semchenko joined Boris Ponizovsky’s theatre troupe named “YES-NO” (да нет), where he was an actor for several years. Later, in 1989, together with V. Vasiliev and M. Isaev from the same troupe, Semchenko co-founded the acclaimed theatre group AKHE, based in the Pushkinskaya-10 Art Center in St. Petersburg. As part of AKHE, the artist realised numerous projects, including films, performances, exhibitions, and dance. The group has seen great acclaim since 1996, with invitations to perform at numerous theatre festivals in Russia and around the world. Plays by AKHE, such as “White Cabin”, “Mr. Carmen”, or “GOBO, digital glossary” among others, have been performed and shown at numerous festivals and shows around the globe throughout the years. Semchenko also continued to sharpen his craft in the visual arts, and with AKHE, he continued to create sculptures, murals, illustrations, and installations. 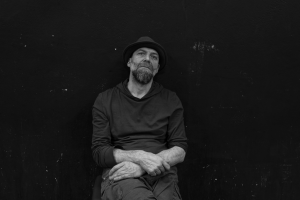 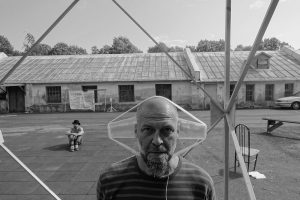 Semchenko has been nominated for various awards on a global scale, including the Innovation award for “SINE LOCO” in 2003 at the Golden Mask festival in Saint Petersburg, the Scotsman Fringe First Award and the Total Theatre Award for “White Cabin” at the Edinburgh Fringe Festival, the Jury Prize for “White Cabin” at ARENA in Germany, and awards for his performance in “White Cabin” and “Mr. Carmen” in Perigueux, France in 2003. 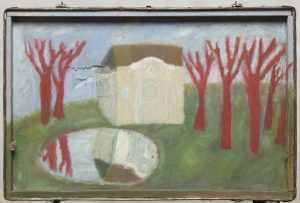 Painting by Pavel Semchenko, courtesy of the artist

Semchenko’s education history has always been tied with the arts. He had graduated from the Leningrad School of Painting having taken courses from the Saint Petersburg Stieglitz State Academy of Art and Design (previously the

Pavel Semchenko is an Artists at Risk (AR) Resident at AR-Safe Haven Helsinki, co-hosted by TINFO and Perpetuum Mobile (PM). Semchenko’s AR-Safe Haven Helsinki residency is co-funded by the City of Helsinki Culture and Leisure Division, the Creative Europe Programme of European Union Project and Theatre Info Finland (TINFO) and curated by Perpetuum Mobile (PM) as part of Artists at Risk – A European Network of Safe Havens (AR-ENSH). From August to September 2022, Semchenko was a resident at AR-Porvoo Art Factory. The AR-Network is coordinated by the AR-Secretariat. 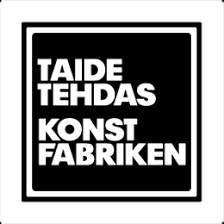