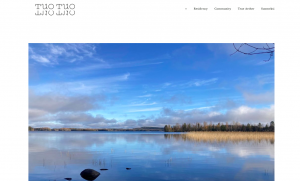 Our response to the growing emergencies facing our planet is not to turn away from culture, but to become all the more demanding of it. We see the keys to progress through participation, experience and openness. The environments we create for ourselves shape the kind of humans we might become.” — via TUO TUO

AR-Juotsa at TUO TUO is an AR-Residency in Joutsa, Finland. The AR-Network is curated by Perpetuum Mobile (PM) and is coordinated by the AR-Secretariat. The Residency is co-funded by TAIKE, Arts Promotion Center Finland. The AR-Secretariat is co-funded by SAC — Artistic Freedom Programme and Ministry of Foreign Affair Finland, Center for Peace mediation.  AR-Joutsa is funded by the EU Creative Europe project Artists at Risk (AR) – A European Network of Safe Havens (AR-ENSH).