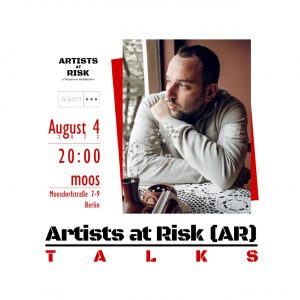 Artists at Risk (AR) is pleased to invite you to the second round of decentralised series of AR TALKS, a programme which introduces to a wider audience artists, curators, and cultural professionals hosted by AR-Residences, or affiliated with the Artists at Risk (AR) Network. It follows in the footsteps of our longstanding MOBILE Talks series.

This summer, the programme will slowly pick up in Berlin where every Thursday, we will gather to discuss the risks and challenges art practitioners at risk face in our troubled times.

In the second AR TALK on Thursday August 4, Harri Kraievets will talk about the challenges of art spaces during the war times and his own artistic practice in exile; at the same time, he will be cooking food for the people attending the talk.

The event is kindly hosted in cooperation with Moos, an urban village for culture-makers, innovators and activists dedicated to change, transformation, and healing. The space situated near Treptower Park collects a number of organisations, including for example, Seawatch.

NB: The next AR TALK will move to Floating University Berlin, where it will take place on August 11 and the following Thursdays.

The programme of these initial AR TALKS is conceived and moderated by Giorgi Rodionov an artist and curator, and co-founder of Artists at Risk (AR)-Tbilisi at the Untitled Gallery @untitled.tbilisi

Harri Kraievets is an artist, performer and curator, born in Odessa, Ukraine. His works takes the psychoanalytic to change its mode of interaction and linguistic apparatus within concepts of identity, nationality, religion and memory. His practice uses video, performance, radio-play, text, poetry and theatre mysteries. Harri is the co-founder of Noch, an artist run space in Odessa.