A huge thanks to TAKU, which has awarded the ARTS AND CULTURE CHAMPION ACTION OF THE YEAR 2022 to Artists at Risk (AR) on 19 November 2022!

Specifically, AR’s work with Ukrainian artists and cultural workers has been designated for special mention by the Trade Union for Art and Culture Professionals (TAKU), which has this to say about why AR received this honour:

“During the past year, Artists at Risk (AR) has helped numerous Ukrainian artists and cultural activists to flee the war. Before the Russian invasion of Ukraine, there were 26 Artists at Risk (AR)-Residencies in different parts of the world; since the invasion, over 500 hosting institutions have signed up to AR’s residency network. More than 1,850 applications have come from Ukraine alone, and more than 300 artists and cultural workers have been placed in AR-Residencies across Europe. There are more than 30 AR-Residents in Finland this year, of which 15 are from Ukraine.

For almost ten years, Artists at Risk (AR) has been building an international residency network and Safe-Haven Residency model to help artists and cultural activists who are threatened in their home country or have to flee war or terror. The Finnish organisation Perpetuum Mobile, piloted by Marita Muukkonen and Ivor Stodolsky, is the force behind Artists at Risk (AR). 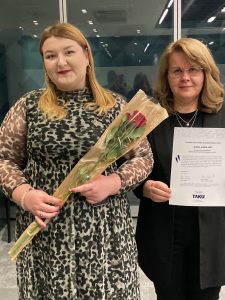 Internationalism, solidarity and the spirit of activism are the core of Artists at Risk’s (AR) activities. This courage is of great importance in the defence of humane democracy.”

We are greatly honoured by this important recognition of all the hard work – so appropriate, coming from a union! – which we have put into this massive task.