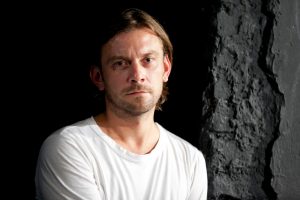 Mikhail Durnenkov (b.1978) is a Russian playwright, screenwriter and teacher of drama currently residing in Helsinki.

Durnenkov is known for holding key roles at the oppositional Russian theatre Teatr.doc, and through his long-standing critical positions became a prominent dissident figure. His plays have been staged at theatres including the Moscow Art Theatre, Alexandrinsky National Theatre, Moscow Sovremennik Theatre and Gogol Centre. Although he completed his degree at VGIK, the Russian State University of Cinematography in 2010, Durnenkov had already been working as a professional playwright since 2000.

Mikhail Durnenkov has received many awards at regional, national and international theatre festivals, including the Grand Prix at the 2011 New Play Festival for “The Simple(st) Way to Quit Smoking”, which also won the 2012 Acting Persons competition. Most recently, his play “Utopia” won the “Golden Mask” National Theatre Award in Moscow.

Further plays include “The Blue Metalworker”, “Easy People”, “The Highway”, “Matador” and “Junk”. Many of his plays have been translated into multiple languages and have been performed in the United States, the United Kingdom, Germany, Finland, Sweden, Poland, Estonia, Romania, Lithuania, Latvia, Kazakhstan, Belarus and Ukraine.

As a playwright, Durnenkov tackles humanitarian and political issues. For example, Durnenkov’s dark comedy “The War Hasn’t Yet Started”, which has been staged in many international productions, describes the Russian annexation of Crimea in 2014.

When Putin’s government invaded Ukraine in 2021, Durnenkov protested the regime’s actions, publicly expressing his anti-war sentiments and solidarity with the people of Ukraine. This placed him under the scrutiny of pro-Kremlin groups, which began a targeted campaign against Durnenkov on Telegram and other social media.

In April 2022, Durnenkov was removed as a member of the Union of Theatre Workers following a public statement by Alexander Kalyagin, a popular actor and Head of the Union, in which the union condemned Durnenkov’s anti-war statements. The Department of Culture of the City of Moscow also demanded the cancellation of theatre performances based on Durnenkov’s works. However, this silencing of Durnenkov, along with his termination from teaching at the Moscow Art Theatre, galvanised other artists and cultural workers in Russia to speak out against the unjust war. Under the scrutiny of the Kremlin, Durnenkov and his family fled in March from Russia to Finland, where the playwright had an engagement with Espoo Theatre and found safety and support at Artists at Risk (AR)-Safe Haven Helsinki.

While residing in Finland, Durnenkov continues his public advocacy by standing staunchly against the Putin regime and with the people of Ukraine, as can be read in his recent interview with the Finnish public broadcaster YLE’s A-Studio and his op-ed in Helsingin Sanomat.

Mikhail Durnenkov is an Artists at Risk (AR) Resident at AR-Safe Haven Helsinki. The programme is co-funded by the City of Helsinki Culture and Leisure Division and the European Union’s Creative Europe project “Artists at Risk (AR) – A European Network of Safe Havens” (AR-ENSH). The AR-Network is coordinated by the AR-Secretariat, which is co-funded by the Swedish Arts Council and curated by Perpetuum Mobile (PM).

Ukrainian cultural institutions, art centres and artist-in-residencies! Join the AR-Network of hosting institutions in Ukraine! (For Ukrainian see below) Artists at Risk (AR) has been supporting Ukrainian artists at safe locations within Ukraine since August of last year. We have … Continue reading →