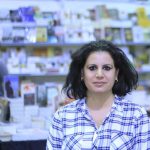 Kholod Hawash is a self-taught textile artist, born in Albasra, Iraq, in 1977. Her work is inspired by the heritage and archeological landscapes of the region she is from. Its bold symbols and forms convey strong local narratives. Due to the persecution of her husband Saddam Jumaily and others in her circle, Kholod sought refuge in Amman, Jordan, before relocating to Finland with the help of AR.

Kholod has participated in many group exhibitions in Iraq and Jordan as well as having held solo shows at Jacaranda Gallery (2010) and Dar Al Anda Gallery (2018) in Jordan. 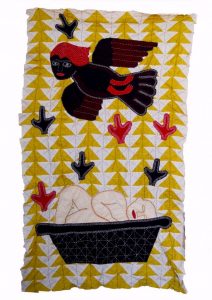 Hawash was previously an AR Resident at AR-Saari Residence funded by Kone Foundation in Mynämäki, Southwest Finland, as part of the joint Artists at Risk (AR) programme with Saastamoinen Foundation. She was also a resident of the long-term AR-ICORN Safe Haven Helsinki Residency, before becoming the inaugural artists-in-residence at the new AR-Porvoo Art Factory Residency at Taidetehtaan taiteilijaresidenssi, along with her husband.

Kholod Hawash was an AR-Resident at Artists at Risk (AR) AR-Safe Haven Helsinki, the Saari Residence/Saastamoinen Foundation Residency and at AR-Porvoo. The AR-Network is curated by Perpetuum Mobile (PM), coordinated by the AR Secretariat, and co-funded by Kone Foundation and the Swedish Arts Council. AR-Porvoo is funded by the City of Porvoo; AR-Saari/Saastamoinen by the Kone and Saastamoinen foundations; and AR-Safe Haven Helsinki, which includes AR-ICORN Residents, by the Department of Culture and Leisure of the City of Helsinki.