Вибачте цей текст доступний тільки в “Англійська Британська”, “Російська”, “Арабська”, “Турецька”, “Іспанська (Європа) і “Французька”. For the sake of viewer convenience, the content is shown below in this site default language. You may click one of the links to switch the site language to another available language.

Saddam Jumaily and Kholod Hawash are currently in the final month of their AR-Residency at AR-Saari/Saastamoinen Residency. Following this, they will continue their long-term AR-ICORN Residency for the rest of 2019 at AR-Safe Haven Helsinki.

Jumaily is a renowned Iraqi painter and sculptor who uses personal imagery and symbolism to convey issues of memory and nostalgia. For Jumaily, “painting is an opportunity to emote”, both giving a sense of meaning to the chaos that has pervaded his region for decades and a personal sense of belonging as the artist has experienced displacement following persecution in his own country. 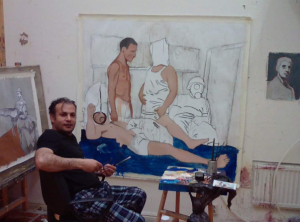 Saddam Jumaily with a work in progress.

With the City of Helsinki becoming a member of the International City of Refuge Network (ICORN), one AR-Residency per year is designated as an AR-ICORN Residency, forming an integral part of AR-Safe Haven Helsinki’s longer-term-stay programme. This programme is curated by Perpetuum Mobile (PM) and funded by the Department of Culture and Leisure of the City of Helsinki.