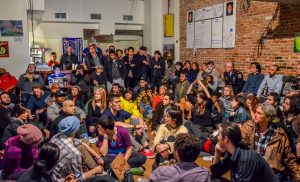 Marisa Holmes is an organizer, filmmaker, and educator based in Brooklyn, NY. She has been active in social movements for over a decade as a facilitator, trainer, and media maker. She was an occupier from day one of Occupy Wall Street, and active in many of its offshoots including Strike Debt, and Occupy Sandy. Since then, she has focused on anti-racist solidarity work in Black Lives Matter, and antifascist mobilizations. She has produced and directed two feature films, All Day All Week: An Occupy Wall Street Story, from inside the occupation at Zuccotti Park, and After the Revolution, about militarization of North Africa and the refugee crisis. Her work has appeared in Truthout, Waging Non-violence, Paris-Luttes, Nawaat, Al Jazeera, and PBS. Currently, she is pursuing a PhD in Media Studies at Rutgers University, and writing a book about new social movements.