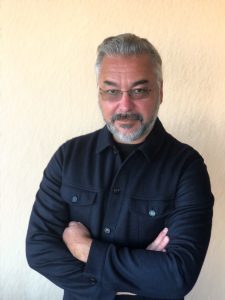 Alfons Karabuda (Stockholm, Sweden, 1967) is a Swedish composer and leading figure in European cultural politics. Karabuda is the president of ECSA (European Composer and Songwriter Alliance), executive chairman of SKAP (the Swedish Association of Composers, Songwriters & Lyricists) and  president of the UNESCO founded IMC (International Music Council). He is also a board member for many more music and arts organisations in the Nordics. Karabuda served as an expert to the UN Human Rights Council, which included working on the first ever UNHRC report on artistic rights in 2013. As the president of ECSA, Karabuda was a driving force behind encouraging the EU to implement the Copyright Directive in 2019 and the formation of a European–American collaboration between ECSA and SGA (Songwriters Guild of America). The organisations have focused on the global issues of artistic rights, free speech and authors’ rights (and in America, copyright), in joint actions such as the Fair Trade Music Initiative. Karabuda also works in the areas of TV, film and theatre through his publishing company Naomi Musikförlag & Filmproduktion AB.