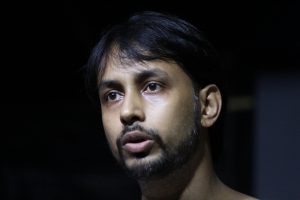 Joyraj Bhattacharjee is a politically integrated art practitioner. He gets many offers to act in various Bengali films but seldom accepts, rejecting them most of the time. When a director gets a scanty flow of money but a superb idea, Joyraj is an obvious choice for them. On stage these days he does more propaganda and less ART. In recent years, he also developed a passion for spending nights in police custody.