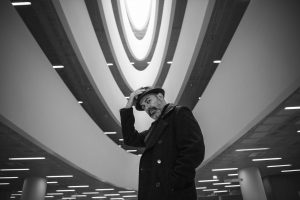 Iranian political cartoonist and visual activist Kianoush Ramezani has lived and worked in Europe since 2009. His editorial cartoons have appeared in Courrier International, The Guardian, Libération, Arte, Ls1, WeDemain and many others. Ramezani has a weekly column Vu par Kianoush Ramezani in La Croix newspaper, published every Monday since 2019, and a series of Ramezani’s original cartoons entitled R like Resistance are part of a collection held by Kunstmuseum Solingen, Germany. He has been curating and organizing international cartoon exhibitions since 2011 across Europe and he initiated the first international cartoon award dedicated to women cartoonists in 2020. He was also a jury member of Interfilm Berlin, 2015-16.

Ramezani has received many awards such as the Angoulême Festival of Comics Award for Artistic Courage in 2018, the 2012 Cartooning for Peace: Swiss Foundation International Press Cartoon Award from Geneva City presented by Kofi Annan, and the Canadian Committee for Press Freedom Award in 2020. He gives educational lectures in high schools, colleges and universities in Europe to raise awareness about the importance of “freedom of expression” amongst the younger generations. He chose Cartooning: The Art of Danger for his TEDx talk in 2014, months before the terrorist attack against Charlie Hebdo. Ramezani is the founder-president of United Sketches – an international organization located in France that promotes freedom of expression and supports cartoonists in exile. He was granted political asylum in 2010 and is now a refugee protected by France.