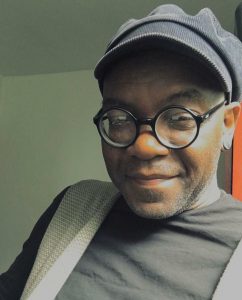 Ricardo Aleixo is a poet, visual and sound artist, performer, intermedia poetry researcher, singer, composer, essayist and editor. He has published, among others, the books Too Heavy for Wind (However, 2018), Antiboi (LIRA/Crisálida, 2017 – finalist of the Oceanos 2018 Award) and Living Models (Ed. Crisálida, 2010 – finalist of the Portugal Telecom and Jabuti 2011 Awards). He has performed in Germany, Argentina, Portugal, France, Mexico, Spain, USA and Switzerland.

He integrates anthologies, collections and special editions of magazines and newspapers dedicated to the diffusion of Brazilian poetry in the USA, Argentina, Portugal, France, Wales, Angola and Mexico. He has participated in collective exhibitions such as Poiesis Poema entre pixel e programa (RJ, 2007), Radiovisual – Em torno de 4’33” (Bienal do Mercosul, Porto Alegre, 2009) and Poética Expositiva (RJ, 2011). He is curator of the ZIP/Zona de Invenção Poesia festival. He edits the magazine Roda – Arte e Cultura do Atlântico Negro and the Elixir Collection, of typographic plates. He develops his creative and research projects at LIRA/Laboratório Interartes Ricardo Aleixo and KORA/Kombo Roda Afrotópica, both located in the Campo Alegre neighborhood, in the northern region of Belo Horizonte.

In #RiskandRebellion, Aleixo will be discussing how Afro Ancestrality Means Rebellion with AR-SHH Resident Benjamin Abras.