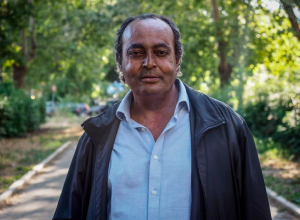 Maaty Elsandoubi is an Italian-Egyptian journalist and activist (Rome / Cairo). He has been a correspondent in Italy for the Egyptian weekly Al Ahaly for many years. When he returned to Egypt, he took part in the revolution that started on 25th January, 2011. In 2017 Maaty Elsandoubi had to return to Rome as an exile, fleeing the regime of former general Abdel Fattah Al Sisi. The story of Maaty is that of many journalists, who first experienced the renewed freedom in Egypt gained after the fall of Hosni Mubarak, and then the renewed dictatorship and censorship imposed on the media by the new president.

Stalker is a collective of artists and architects, which is formed in twenty years of research and practice in the territory of Rome and beyond, with particular attention to marginal areas and urban voids. The method of intervention is experimental, based on exploratory, listening, relational, convivial and playful spatial practices, activated by creative interaction devices with the investigated environment, with the inhabitants and with the archives of the memory. Stalker is our AR-ENSH project partner in Italy.

NoWorking is a convivial space-time of art in Rome in which to think together through shared artistic, civil and spiritual action. It is a space of discovery, care and hospitality, of one’s self, of others and of the world. It is a space for unlearning the behaviours, relations and ideas imposed by contemporary life. The space hosts a large library, freely accessible, mainly about art and architecture books, political and Mediterranean subjects, and the entire Stalker archive. NoWorking was started by Stalker in 2016 together with other artistic collectives, it is an open space run by an informal group – artists, architects, curators, dancers, and so on – changing from time to time.