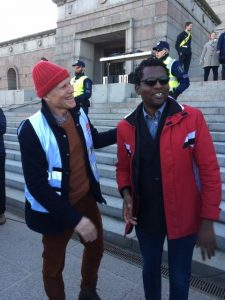 Thomas Wallgren is interested in the theory and practice of radical non-violent solidarity, ecological justice, democracy and transformative change. He has been an activist since the 1980s in environmental and solidarity movements and has also had key functions in many NGOs such as the the Finnish Refugee Council, the Helsinki Art Museum and in the NIGD (Network Institute for Global Democratisation) and Vasudhaiva Kutumbakam, both members of the International Council of the WSF. Currently Thomas is a board member of the Corporate Europe Observatory and the University of Helsinki and an elected member of the city council in Helsinki for SDP. Thomas is also professor of philosophy at the University of Helsinki and the director of The von Wright and Wittgenstein Archives. He is the author of Transformative Philosophy and editor of the Special Issue of the journal Globalizations on Transformative Responses to Authoritarian Capitalism: Learning with the World Social Forum (2020). Thomas is also an AR-SHH Steering Committee member.

Here he is pictured with former AR-Resident Nkosilathi Emmanuel Moyo, who will also be taking part on Sunday!