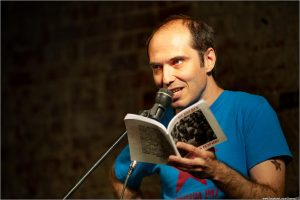 Kirill Medvedev (1975) is a poet, translator of poetry and political theory from English, and a political activist in the Russian Socialist Movement specialized in trade unions, ecology and antifascist activities. He is the co-founder of Free Marxist Press and Arkadiy Kots riot-folk band who play at strikes, rallies and concerts in solidarity with political prisoners. Kirill is based in Moscow.