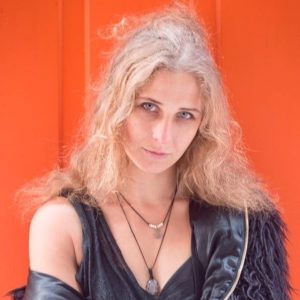 Maria “Masha” Alyokhina is a Russian political activist and founding member of Pussy Riot, the radical, feminist punk group she initiated together with Nadezhda “Nadya” Tolokonnikova and Katya Samutsevich. On August 17, 2012, Alyokhina and Tolokonnikova were convicted of “hooliganism motivated by religious hatred” for their famous “punk-rock prayer” in Moscow’s central Cathedral of Christ the Saviour. They were sentenced to two years’ imprisonment. She has been recognized as a political prisoner by the Union of Solidarity with Political Prisoners. Amnesty International named her a prisoner of conscience due to “the severity of the response of the Russian authorities.”

Since their trial and early release from harsh prison conditions, which resonated around the world, Pussy Riot has carried out further daring actions, including storming the World Cup Final football field in Sochi, among many others. They are also key to the founding of the online media outlet Mediazona and Zona Prava, a prisoners’ rights protection organization, together with other former members of the Voina art group. Masha Alyokhina’s book Riot Days became a punk theatre piece by the same name about her life, imprisonment and ongoing, daring political resistance to the Russian government. She is touring it around the world, when she is not busy with new actions and protests – such as today’s protests concerning Navalny’s imprisonment in Moscow!