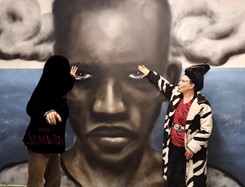 Finnish street Artist, Sampsa examines one of the murals on the interior of “The 210” with world renowned artist ORLAN 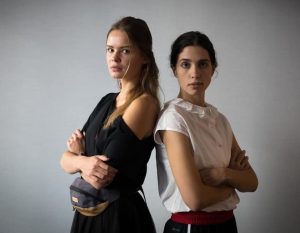 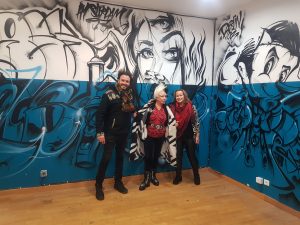 Conceptual artist and activist Nadezhda “Nadya” Tolokonnika is key founding member of Pussy Riot, a global feminist protest art movement. She was sentenced to two years’ imprisonment following an anti-Putin performance in 2012. Nadya staged a hunger strike protesting savage prison conditions. Sent to a distant Siberian penal colony, she survived to maintain her artistic activity and toured Siberian labor camps with her prison punk-band. In 2014 she co-founded the independent news service and media outlet, Mediazona together with Masha Alekhina among others. Her book “Read and riot: Pussy Riot’s guide to activism” was published in 2018. Nadya recently put out “Rage”, a track calling for the release of Alexei Navalny and all political prisoners, including Pussy Riot’s own Masha Alekhina who is currently sentenced to a year’s term of “restricted freedom” by a Moscow court, and has been designated Artists at Risk (AR)’s first AR-Resident Prisoner.