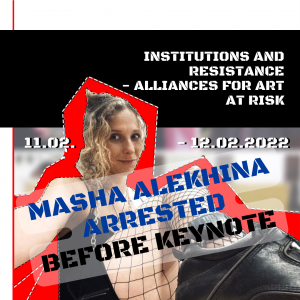 Last night, Maria Alekhina was apprehended by Russian authorities and brought to a Moscow police department under orders of «administrative detention» on unknown charges. Masha was designated an AR-Resident Prisoner by Artists at Risk (AR) in December 2021, and this latest arrest comes only days before a high-profile keynote speech she was scheduled to give at a symposium Artists at Risk (AR) is organising with ZKM – Center for Art and Media in Karlsruhe, Germany, with the subtitle “Alliances for Art at Risk”. For the full programme see: https://zkm.de/en/event/2022/02/institutions-and-resistance-alliances-for-art-at-risk.