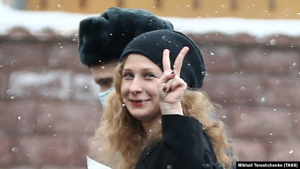 The grounds for sentencing provided were violation of curfew and Alekhina’s removal of her electronic bracelet while under “restricted freedom” or in other terms, house arrest. Alekhina had cut the strap of her bracelet in protest not just of the several outrageous detentions and arrests she was subjected to — the latest being her arrest days prior to her scheduled appearance as the keynote speaker at the AR-ZKM “Institutions and Resistance — Alliances for Art at Risk” symposium — but also of Putin’s horrific and antidemocratic invasion of Ukraine.