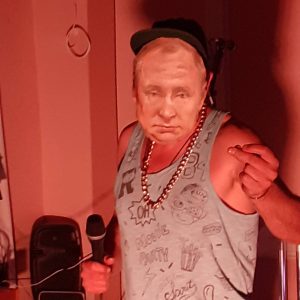 Aleksey Yudnikov, « The Member », performance at the Venice Biennale, 2022.

Aleksey Yudnikov (1973, Kyiv) is a Ukranian-born theatre and film actor, director and screenwriter, currently living in exile in Helsinki.

Yudnikov graduated from the Russian Academy of Theater Arts (RATI-GITIS) in Moscow. Over the course of his professional career, he worked on various projects with the Mayakovsky Theatre and the Stanislavsky Moscow Art Theatre, though he is most known for his productions as part of the oppositional Documentary Drama Theatre, TEATR.DOC, in Moscow.

Documentary Drama Theatre TEATR.DOC was founded in 2002 by several playwrights. The organization is a non-governmental, non-profit, independent, collective project which focuses on the production of documentary theatre, a special genre that exists at the junction of art and contemporary social analysis based on authentic texts, interviews and real people’s lives. The theatre’s creative teams, including Yudnikov, have staged performances, based on encounters with real people, of the most relevant and critical topics of the world around them.

Yudnikov has participated in numerous theatre festivals, including Lubimovka,  The New Drama Festival at the V. Meyerhold Centre, Yasnaya Polyana Laboratory, and The Big Break at Praktika Theatre. Yudnikov has acted and played in over 35 films and theatre plays, and in 2012, was awarded with the « Golden Mask » award for the play, « Light My Fire ».

Aleksey Yudnikov had been living and working in Russia for almost 30 years, however, following the war in Ukraine, Yudnikov fled Russia and found shelter at AR-Safe Haven Helsinki in Finland. Since his residency, Yudnikov has staged a performance to protest Putin’s authoritarian regime and the war waged on Ukraine. The performance was held at the Russian Pavilion in the context of the 59th Venice Biennale concerning Ukraine and World Peace.

Aleksey Yudnikov is an Artists at Risk (AR) Resident at AR-Safe Haven Helsinki. Yudnikov was born and raised in Ukraine. He made his name as an actor in Moscow – at the famed oppositional Teatr.doc among others. Yudnikov’s AR-Safe Haven Helsinki residency is co-funded by the City of Helsinki Culture and Leisure Division and Theatre Info Finland (TINFO), and is co-hosted by TINFO and Perpetuum Mobile (PM). The AR-Network is coordinated by the AR-Secretariat.