State Art Award 2022 – Acceptance Speech by the Directors of AR 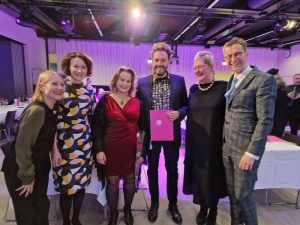 As Co-Founders, and Co-Directors of Artists at Risk (AR) we are deeply honoured to be awarded the first, that is, inaugural prize for Social Impact as part of the State Art Awards of TAIKE, the Arts Promotion Centre Finland, here in Helsinki, where everything began.

We want to dedicate this prize to all those artists and cultural professionals around the globe who are employing their creative skills to fight for the basic rights of existence, the human rights of freedom of expression, speech, and creation; and also to those who – as we speak –  are threatened by persecution, war or terror.

We want to mention – if only a very few – by name. Saman Yasin, a young Kurdish artist and rapper, has been sentenced to death. In total, 448 people to date have been killed in the protests sparked by the murder of Kurdish Iranian Mahsa Amini, after her arrest by the Islamic Republic of Iran’s Morality Police.

We want to commemorate poet and activist Ericson Acosta and his wife who were brutally murdered by the Armed Forces of the Philippines last week. We want to send strength to flautist and prominent opposition figure Maria Koleshnikova, who has been serving an 11-year prison sentence after leading mass street protests against President Alexander Lukashenko in Belarus. She is in intensive care in the hospital for unknown reasons.

The fate of these extremely brave artists shows how authoritarian governments – built on simplistic, brutish narratives – are afraid of the power of free artistic expression and thought.

The freedom to protest is a right. Art is not a crime.

Artists at Risk (AR), which is abbreviated as AR, works at the intersection of the arts and human rights. We work with and for the benefit of artists and cultural professionals at high risk. The focus of AR’s work is to facilitate their escape from danger, and offer temporary relocation for these artists – our peers and colleagues – in contexts where they can continue their artistic work, aside from guaranteeing their physical safety. Before it is too late.

This highest State Prize comes at a momentous time in Artists at Risk (AR)’s development. We hardly had taken a breath since the disastrous western withdrawal from Afghanistan, when the intensity of our work was heightened to fever-pitch with Russia’s brutal invasion of Ukraine. Since the war broke out, the AR-Ukraine Solidarity has relocated more than 350 Ukrainian artists. The AR-Belarus / Russia Solidarity team has moved over 150 Russian and Belarusian dissidents. More than 35 of these artists and cultural professionals have been hosted throughout Finland, and the remainder have found safety in AR-affiliated residencies across Europe.

These are massive numbers for a small organisation from the field of art. Only the massive wave of solidarity for Ukraine made this possible. Before the war broke out, AR had 26 AR hubs in 20 different countries globally. The AR-Network has now received more than 500 offers to host artists at risk from across continents.

Today, we are fighting for the same solidarity to be shown to artists at risk from around the world.

Today, Kurdish artists and activists are being targeted in all four countries their native lands encompass. In Iraq, a Kurdish teacher of jineology Nagihan Akarsel was recently murdered by Turkey’s security service. Turkey’s war of aggression on Rojava saw 60% of Afrin’s Kurdish population ethnically cleansed in 2018, according to Genocide Watch. As we speak, this democratic, gender-conscious, majority-Kurdish community is again being attacked by Turkey with NATO jets. So AR is relocating artists and human rights defenders from all parts of Kurdistan – in Iran, Syria, Iraq and Turkey.

AR has not forgotten Afghanistan. Due to western visa-denials, over 450 Afghan painters, hip-hop dancers, contemporary artists, musicians, curators, rock musicians, comedians… are still in Afghanistan, Iran or Pakistan. Practising their vocation is punishable by death. It is shameful, but not one has been allowed to enter Finland.

Because, yes, the biggest obstacle to our work is the visa regime. This is why we have been fighting for the introduction of an EU-wide “human rights visa” for art and human rights defenders. Currently, new campaigns have been launched to achieve this alongside Amnesty International, Reporteurs sans Frontiers and many other like-minded organisations.

Without the bravery of dissident activists at the frontline of political change, risking their lives, there can be no democratic political change. If Europe can handle 6 million refugees from Ukraine, why can’t we take 450 Afghan artists and others like them? Their numbers are miniscule in comparison, and it is clear: Europe has more than enough capacity to receive them.

The wave of solidarity for our work has been strong in Finnish culture. We gave a warm welcome to many new partners who joined the AR-Network this year, such as the Theatre Information Center (TINFO), the Dance Information Center, Mustarinda, the Art in Lov residency, Tampere Artists’ Association, Filmverkstaden in Vaasa, Tohmajärvi municipality, Globe Art Point, the Finland-Russia Society, Publics, the Tuotuo residency in Joutsa, Fiskars AiR, the Öres Residency Programme, Alpo Aaltokoski Company and Espoo City Theatre among others.

We especially want to thank AR’s long-term partners and peers such as the City of Helsinki and its Council Members, Saastamoinen Foundation, PEN Finland, the Finnish National Theatre, the Finnish Artists Association, FIME, the City of Porvoo,  YLE Radiotheater, Myymälä 2, Galleria Rankka, Culture for All, Lapinlahden Lähde and Hietsun Paviljonki to mention but a few. Warm thanks go to many peer-artists, peer-curators who have engaged in their work with dedication!

Our gratitude also goes to our new major international partners and funders such as UNESCO, Goethe Institute, SWAN – Swedish Residency Network, the Andy Warhol Foundation, the Swedish Arts Council, and the Finnish Ministry of Foreign Affairs among others.

We want to express our heartfelt thanks to all our amazing peer-network which made AR possible globally – from NoCallarem and the CCCB in Barcelona to the ZKM in Karlsruhe, from Artveda in Tunis to ThusCritique in Goa. And of course to our remarkable, tireless AR-Solidarity Team members and staff as a whole, including our area specialists and all of the hundreds of hosting-colleagues and peers who have trusted and believed in our vision of AR!

The field of art must stand in solidarity with its peers every day. With concrete actions, not metaphoric gestures. We hope that this solidarity lasts over the cold winter and the new wave of attacks on Ukraine as much as Kurdistan. We call for a flowering of alliances in the field of art and society to help artists and all others at risk.