Photos from the opening night
Works and Installation shots 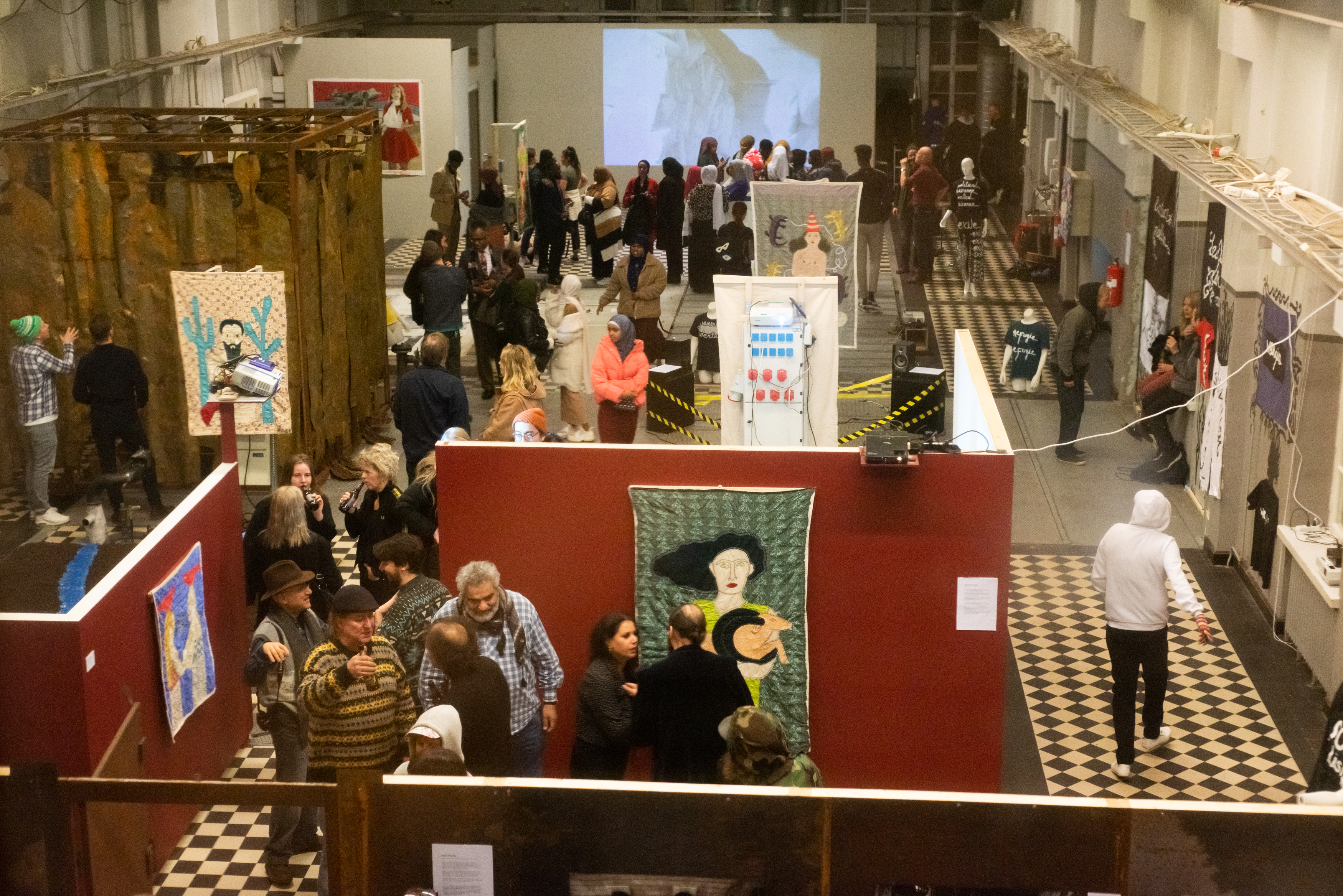 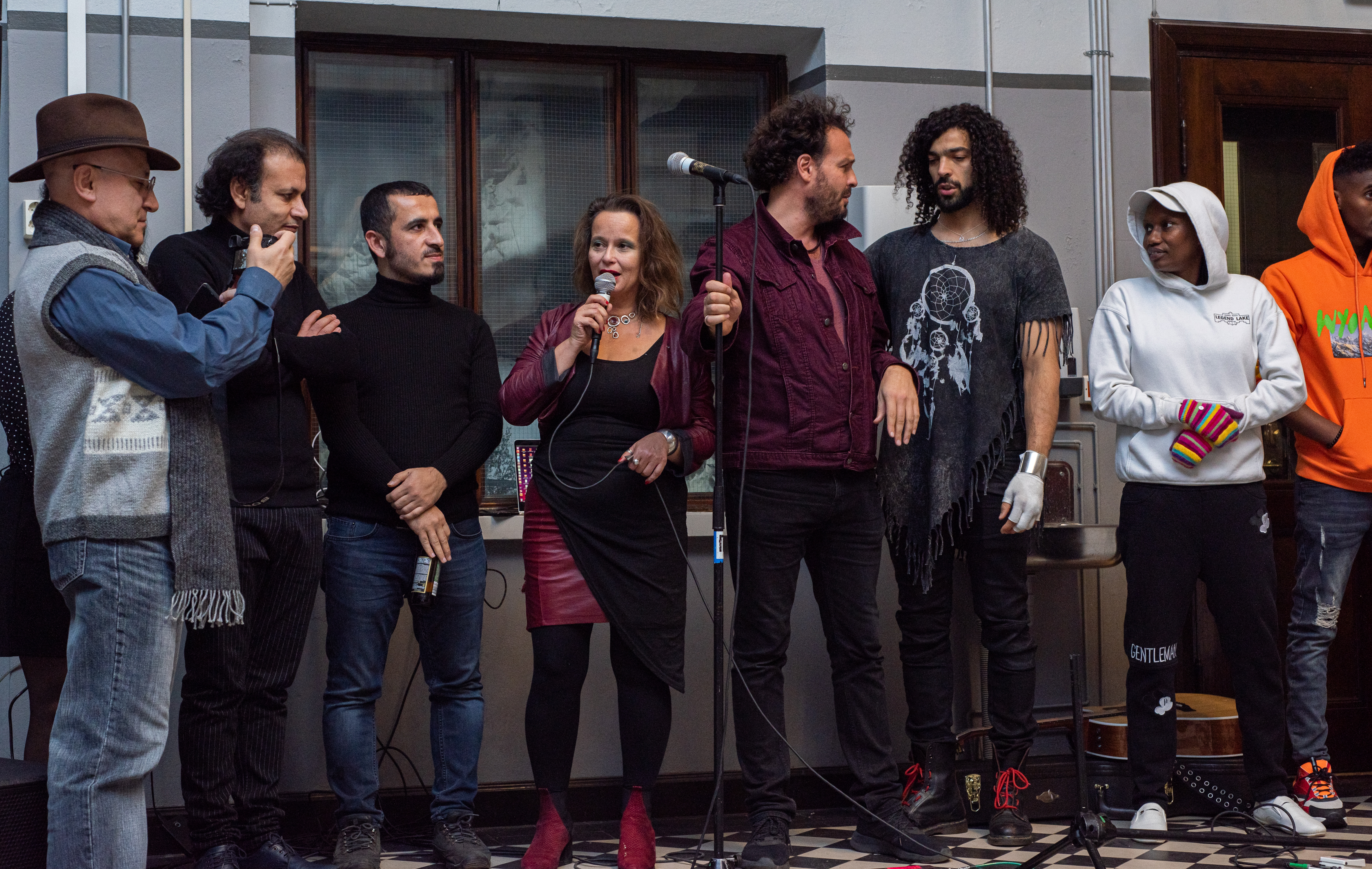 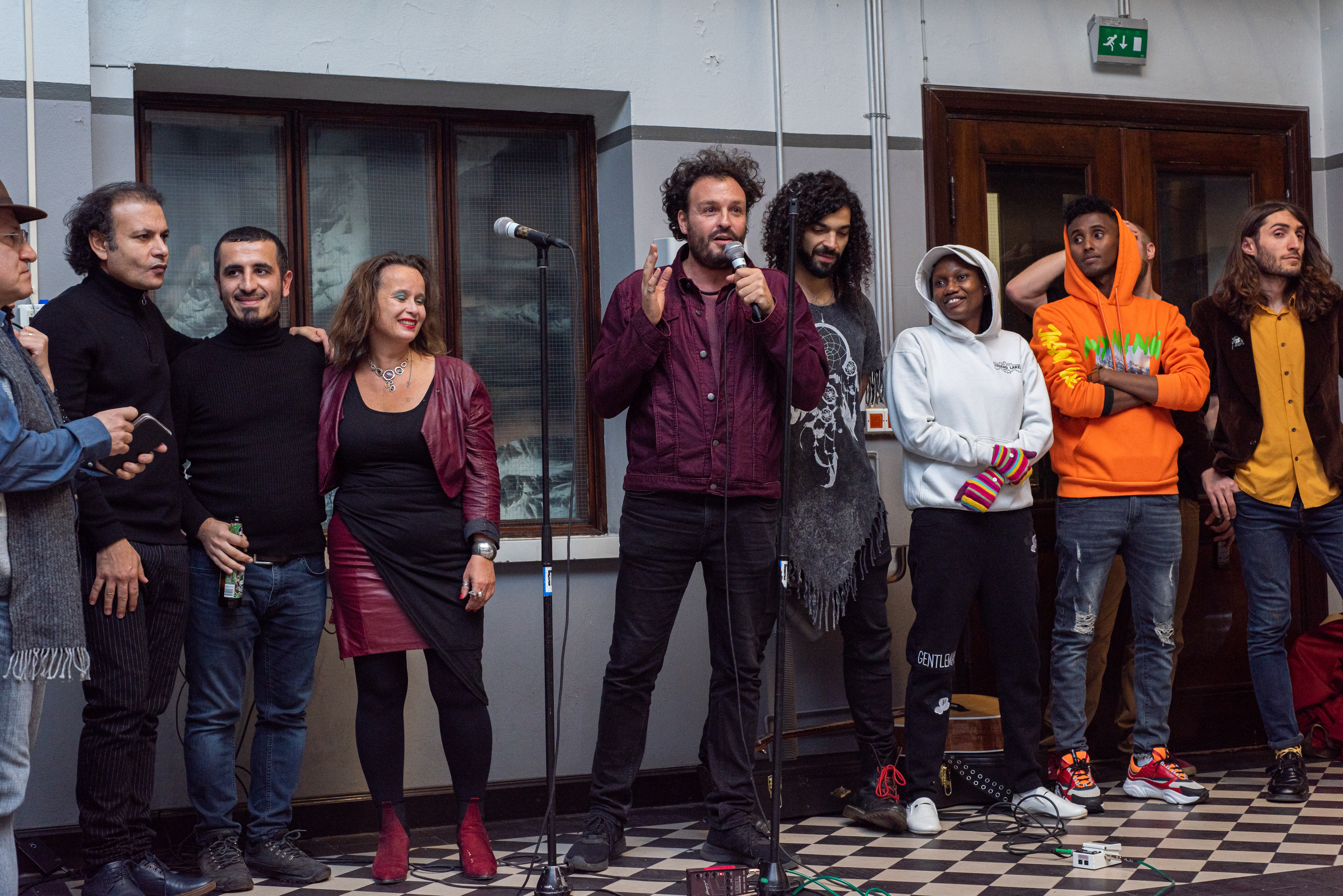 The violent injustices, dramatic specifics and complex trajectories of the emergencies which put artists at risk – be they Afro-indigenous Brazilians, Iraqis or Kurds from across ancient Mesopotamia’s blood-soaked contemporary borders, secular artists under religious regimes, Europeans of Romani descent, dissident ecologists, or indeed any dissenting voices resisting the crude appeals of hydra-headed fascism – are all radically different.

From a perspective of safety – where you, dear reader, are most likely located – all of these violations of physical dignity and freedom of expression are clustered under one universal: their haptic absence. In other words, these emergencies are scarcely felt in the here and the now. Or do you feel something that scrapes your skin, embattles your ears, stings your eyes – your very own – dear reader?

Emergencies flash by on screens, generated somewhere, somehow by someone, or some algorithmic machine. One by one, each is soon suppressed by newer news, with the angry seas of mass (mis)information rising. It’s always been easier to let yourself forget.

The Helsinki edition of the Artists at Risk (AR) Pavilion is an exhibition of first-hand witnesses and storytellers; bodies as living documents; makers of unmade monuments; creators of memory-machines of worlds whose language you may have forgotten, denied or never learned. Translating the physically-absent into the mentally-present: the art of making memory.

“Why are We always on the Outside?” asks a great artist, a Gypsy as he calls himself. This massive work, which hung on the outside of Moderna Museet Malmö, and on a central square in Berlin, now adorns Helsinki’s Eerikinkatu. Are the Romani people, Europe’s largest ethnic minority like he says, “1000 Years Refugees”?

Water climbs slowly to efface one of the first sites of human settlement, 12,000 years old. Streets and cafes are submerged, homes follow, then generations of dwellings, entire civilizations, human-geological strata. This settlement is not cursed by angry gods; nor is this a biospheric response to our anthropocene hubris. We are speaking of just another dictator’s dam. Do you remember Hasankeyf?

What is that war about, in the blood-soaked steppes of Ukraine? Or that war, in 1918, on Helsinki’s Long Bridge? Brother kills brother, and their sisters make the ammunition. Can bullet-holes be filled with molten bronze, to heal the wound? Or should a civil war be manifested in beaten iron figures and the screaming of the wind?

ARTISTS at RISK (AR) is an institution at the intersection of human rights and the arts. AR is dedicated to mapping the field of persecuted art practitioners, facilitating their safe passage from their countries of origin, hosting them at Artists at Risk (AR)-Residencies and curating related projects, such as the AR PAVILION.

The AR-Pavilion Helsinki is generously funded by the Finnish Cultural Foundation, City of Helsinki and Kone Foundation as well as other foundations, partnerships and donations.

ARTISTS at RISK at FRIEZE NY

In a statement, the directors of AR, Ivor Stodolsky and Marita Muukkonen announced the moment:

“The invitation of Artists at Risk (AR) to Frieze New York opened an incredible opportunity to showcase a whole new set of artists following the successful Solidarity Prints campaign. Our new SOLIDARITY initiative focuses on the work of the very artists those household names came together to support: AR-Residents and associated artists issuing from contexts and themes of art at risk.”

All works in this Viewing Room are poster-size prints of the depicted artwork sold at 200 Euros each in an open edition.

Each participating artist receives a flat fee for their participation, plus 25% of all proceeds on the sale of their work. The remaining proceeds go directly to supporting and facilitating the safety of artists at risk from around the world.

ARTISTS at RISK (AR) is a non-profit organization (with 501c-3 equivalency) active at the intersection of human rights and the arts. Since 2013, AR has built a mondial network of arts and non-profits, municipalities, states, and international organizations to assist, relocate and fund artists at risk of persecution, oppression, or fleeing war or terror. AR has hosted artists in 26 locations in 19 countries globally. Since the beginning of the invasion of Ukraine over 500 hosting institutions have signed up to the platform across Europe in order to relocate and support the over 800 art practitioners at risk due to the war in Ukraine, and 250 dissident artists at risk of persecution, imprisonment torture or worse from Belarus and Russia. They have registered via the forms on Artists at Risk (AR)’s website. Explore AR’s artists in residence, including alumni such as «AR-Resident Prisoner» Masha Alyokhina of Pussy Riot or the pop-star Mai Khoi from Vietnam, and other renowned figures from around the world at artistsatrisk.org.

Disculpa, pero esta entrada está disponible sólo en Inglés Británico. For the sake of viewer convenience, the content is shown below in the alternative language. You may click the link to switch the active language. Artists fleeing persecution and war … Sigue leyendo →

Disculpa, pero esta entrada está disponible sólo en Inglés Británico. For the sake of viewer convenience, the content is shown below in the alternative language. You may click the link to switch the active language. Source: Yle 03.05.2022 PRESS TEXT … Sigue leyendo →

Disculpa, pero esta entrada está disponible sólo en Inglés Británico. For the sake of viewer convenience, the content is shown below in the alternative language. You may click the link to switch the active language. Source: The Art Newspaper José … Sigue leyendo →

Disculpa, pero esta entrada está disponible sólo en Inglés Británico. For the sake of viewer convenience, the content is shown below in the alternative language. You may click the link to switch the active language. On the 26th of April, … Sigue leyendo →