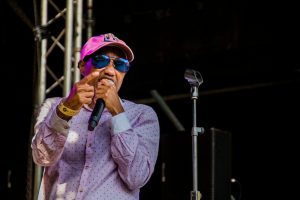 Grace Munene, aka Grammo Suspect, also known as Rainbow Ambassador Kenya, is a rapper and poet whose art defends LGBTQI+ rights.  She is an activist, feminist and pan-Africanist. Grammo founded Rainbow Talent Kenya, a project which aims to uplift the voices of marginalised groups in Kenya. As a lyrical activist, she is dedicated to fighting for equality through her music. Her new album, entitled Embrace Diversity, was released in May 2020 and can be found at all digital music stores, including on her website. Grammo campaigns against the discrimination and harassment she and the rest of the LGBTQI community face in Kenya on a daily basis.

Grammo Suspect – Rainbow Ambassador Kenya is an Artists at Risk (AR) Resident at an undisclosed location. The AR-Network is curated by Perpetuum Mobile (PM) and is coordinated by the AR-Secretariat, co-funded by Kone Foundation. Her current AR-Residency is funded by the AR Covid-19 Emergency Fund, ProtectDefenders.eu and the City of Helsinki. Previously, Grammo Suspect was the first AR-Resident at AR-Catalonia in cooperation with #NoCallarem and Konvent.zero.