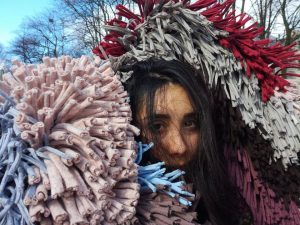 Angela Aldebs (Damascus, Syria, 1995) is a dancer, choreographer, performance artist and pharmacist. She works mainly in the fields of physical theatre, ballet and performance art. In the Middle East, she collaborated with a number of Syrian artists on contemporary dance and theatrical performances in both Damascus and Beirut. Since arriving in Finland as an AR-Resident at AR-Safe Haven Helsinki in 2019, Aldebs has collaborated with the Finnish National Theatre and Zodiak Centre for New Dance. Undocumented Love at the National Theatre was her first production in Finland. Several others followed in collaboration with the Valokeilasssa Koillinen project. In the winter of 2020-21, she brought to life Dark Reflections, a Coronavirus-safe outdoor dance on the experience of the darkness of the Finnish winter. Currently, she coordinates the Middle East Project at the Finnish Theatre Academy, leads workshops for nonprofessionals in the performing arts and enjoys teaching childrens ballet. Angela is one of seven performers from seven countries starring in the European Theatre Collective’s The Cleaners, a new play showing at the Alexander Theatre in Helsinki this April.

Angela Aldebs was an Artists at Risk (AR) Resident, hosted in cooperation with the Finnish National Theatre and Zodiak at AR-Safe Haven Helsinki from 2019-2020. The AR-Network is curated by Perpetuum Mobile (PM) and is coordinated by the AR-Secretariat, co-funded by Kone Foundation. Her residency was co-funded by the Division of Culture and Leisure of the City of Helsinki, the Finnish National Theatre and Zodiak.